Umbria
You are here:
Home » Towns of Umbria » Towns in the Province of Perugia in Umbria » Vallo di Nera 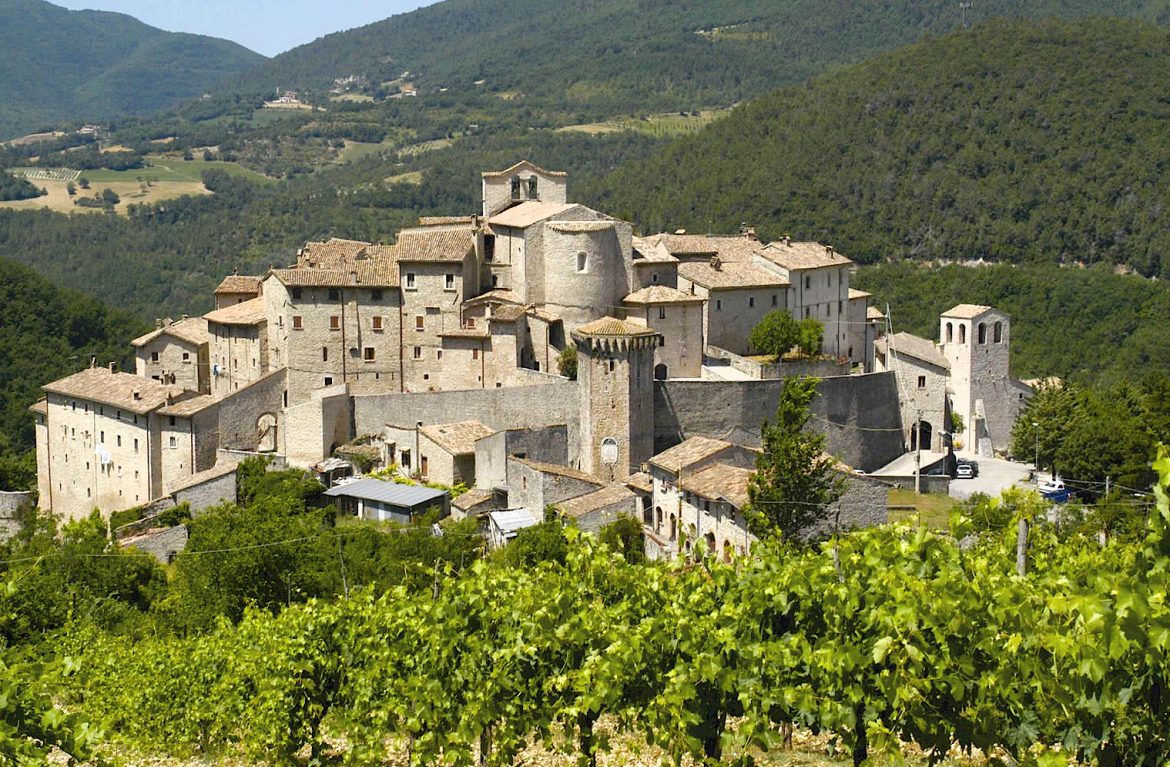 All about Umbria, Things to see in Umbria, Towns in the Province of Perugia in Umbria

The Val di Chiana of Umbria and Tuscany

The attractive village of Vallo di Nero in Umbria retains its mediaeval character almost intact and is well worth a visit. Its walls, towers and lanes are extremely photogenic and the principal church of Santa Maria contains frescoes by Cola di Pietro da Camerino, a member of the school of Giotto.

The municipality of Vallo di Nera covers about 36 km². It is located in the Valnerina valley on the river Nera in a spectacular location, about 200 km southeast of Florence and about 60 km southeast of Perugia. Other towns in the municipality include Geppa, Meggiano, Montefiorello, Paterno, Piedilacosta and Piedipaterno. The bordering municipalities are Campello sul Clitunno, Cerreto di Spoleto, Poggiodomo, Sant’Anatolia di Narco and Spoleto.

The first human settlements in Vallo di Nera go back to the 8th century BC when the Naharci inhabited small settlements here. The name Nahar, which gave its name to the river Nera, also dates to this period. From the second century BC, the Romans dominated the area.

Beginning in 1177, Vallo di Nera became a fief of the Germanic duke of Spoleto, Corrado di Hursligen. A fortification was built on the hill of Flezano, the Rocca de Valle. In 1198, the Duke Corrado was forced to surrender the fiefs to the Church and in 1217 Jacopo Capocci, mayor of the Municipality of Spoleto, formally granted the inhabitants of Vallo di Nera the possession of Colle di Flezano and the right to build a castle there, in exchange for protection and defense of Spoleto. This Castrum Valli soon became an important strategic control point of the Umbrian road network. A notarial document preserved in the State Archives of Spoleto certifies and describes the concession. In the 14 C and 15 C, the castle of Vallo was the most populous in the Valdinarco. In 1523 the papal governor of Spoleto, Alfonso Di Cardona was killed by Petrone da Vallo near the bridge over the Nera. Petrone, together with Picozzo Brancaleoni, had led the revolt of the castles against Spoleto. After the unification of Italy, in 1881 the municipality of Meggiano-Paterno was aggregated to the municipality of Vallo di Nera.

The Church of St. John the Baptist (Chiesa di San Giovanni Battista) is located in the town centre and dates from the 13 C. It was partly redesigned in the 16 C. This church contains frescoes by Jacopo Siculo (including Transito della Madonna, also called Dormitio Virginis, 1536, and Incoronazione e Morte della Vergine, in the apse.

The Franciscan church of Santa Maria contains various frescoes (also in the sacristy) of the Giotto school including the famous “Procession of the Whites” painted by Cola di Pietro da Camerino in 1401.

Chiesa di Santa Maria, church built by the Franciscans in the 13th century. The church is mainly famous for the large number of frescoes in the interior, including works by Cola di Pietro (Processione dei Bianchi, 1401) and Maestro di Eggi from the 14th and 15th centuries.

Chiesa di San Rocco (also called Immagine del Trivio), 15th century church located in Borgo Casali just outside the city walls. The portico was built in 1680, and there are frescoes on the altar that are attributed to Maestro di Eggi.

Immagine delle Forche (also Madonna della Neve), chapel from the 15th century outside the village on the dirt road to Castel San Felice. Contains frescoes by Jacopo Zabolino from 1494.

On a weekend in June, farms present themselves with their products at a “cheese festival”. The main purpose of the Fior di Cacio event is to present the specialties of the Valnerina region to residents and tourists. The annual festival was launched by Mayor Agnese Benedetti in 2002.

Different varieties of sheep’s cheese, fresh ricotta made from cow’s milk, mild ricotta made from goat’s milk and pecorino cheese are typical of this region. The focus of the early summer festival is also the life of the shepherds who make cheese in their own small businesses.

Monuments and places of interest

Vallo di Nera is a monument-town. The stone houses are surrounded by walls and towers and keep intact its medieval urban structure, with narrow alleys surmounted by arches.

We also remember the parish church of San Giovanni Battista with frescoes by Jacopo Siculo and that of Santa Caterina annexed to the former convent of the Franciscan tertiary with remains of frescoes. Just outside the walls are the church of San Rocco and that of the Immagine delle Forche. For the visit outside the holy mass, ask the neighbors of each church. Also visible are two valuable dovecote towers that are located in the sixteenth-century Borgo dei Casali. A trekking circuit inside the historic center offers a visit to the ancient wood-burning ovens and a tour of the historical sources. In the small building of Portella, one of the two entrances to the town-castle, you can visit the Casa dei Racconti, a center for documentation and collection of the oral literary heritage.
Frescoes

The fresco was made in the mid-fifteenth century, is the work of an anonymous Umbrian and is located on the facade of a house in Via S.Caterina.

It is a devotional fresco depicting the Madonna with Child and angels holding the curtain.

The work, of high historical and artistic value, has recently been restored.

Vallo di Nera: Fresco of 1653 depicting “The Virgin between St. John the Baptist and St. Francis”, commissioned by the vicar Giovanni di Mascio and made by Achille di Valerio.

Next to this fresco are the coat of arms of the Cesi nobles of Acquasparta, patrons of the community of Vallo di Nera at the Roman Curia and the cardinal coat of arms of Bartolomeo Cesi, papal legate and of the municipality of Spoleto.

The fresco is located in the former municipal building of Portella (one of the two access gates to the town-castle).