Orvieto - things to see at Orvieto in Umbria, Italy

Orvieto
You are here:
Home » Towns of Umbria » Towns in the Province of Perugia in Umbria » Orvieto 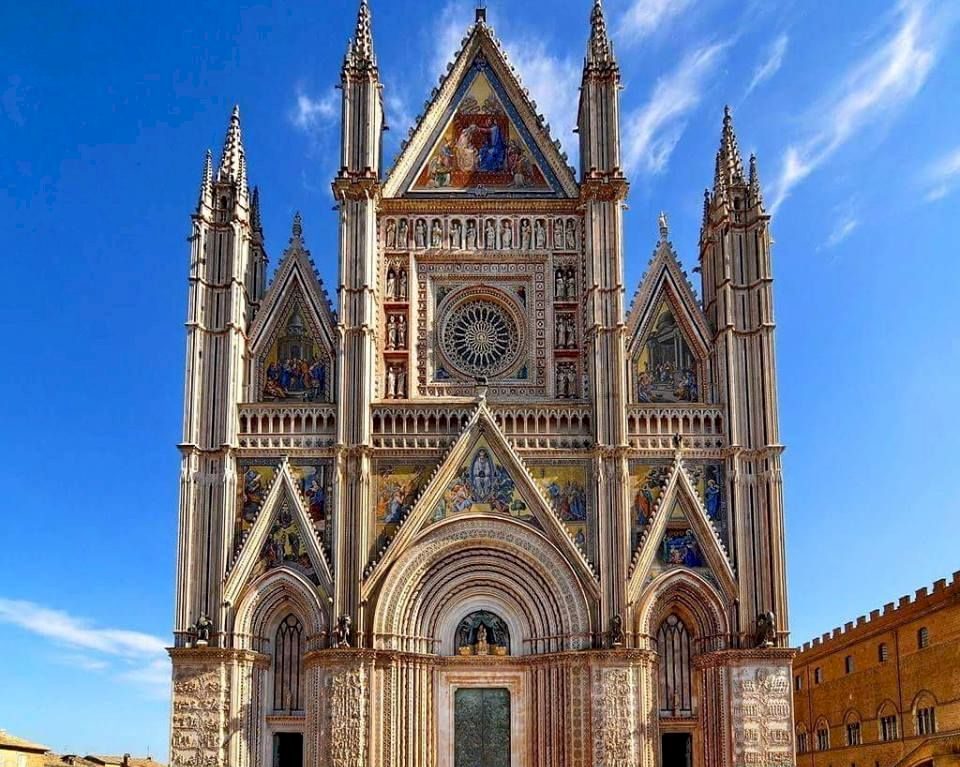 Things to see at Orvieto in Umbria, Italy

Orvieto floats above the green Umbrian plains atop a high, flat-topped rocky outcrop. The exceptional views commanded by the city, as well as the beautiful skyline of Orvieto itself, can be enjoyed from the top of the 13 C Torre del Moro, the highest vantage point in town. Orvieto is a rare Italian car-free haven. Access to the city is either via the funicular that runs from the railway station below up to the old town centre, passing directly by the Albornoz fortress, or up the system of escalators dug into the cliffs from the parking lot at Campo della Fiera. There is also a regular minibus service that covers the entire city.

Orvieto has a number of fascinating and attractive churches, but it is known worldwide for one spectacular structure and that’s its cathedral (Duomo), the great glory of Orvieto and a masterpiece of Italian Gothic art. The basic structure is quite sober, constructed of bands of black and white stone, but a most extraordinary façade has been applied to it: bronze dragons, gables with mosaics resplendent in gold, and marvelous marble bas-reliefs by Lorenzo Maitani – an early 14 C interpretation of the sculptural style of imperial Rome. The interior is also quite simple except for one large chapel entirely covered in dramatic frescoes by Luca Signorelli, famous in their own right, but also the chief inspiration for Michelangelo’s Sistine Chapel.

The historical Palazzo dei Papi (Palace of the Popes) is the site of the Museo Archeologico Nazionale, and contains some of the area’s Etruscan artifacts, including a full-scale tomb. Excursions of the Etruscan and mediaeval “Underground City” are available. Though sacked and pillaged by the Romans, many of the original Etruscan mills, cisterns, pottery works, quarries, canteens and burial chambers remain preserved beneath the city. Other Etruscan artifacts can be found in the Museo Civico and Museo Faina.

In the oenological field, Orvieto is best known for its white wines which are a blend of Grechetto with some Trebbiano, sold as Orvieto (DOC) and Orvieto Classico (DOC). Blended red wine and several varietal reds are sold under the Rosso Orvietano DOC. The region has been producing wine since the Middle Ages, when Orvieto wine was known as a sweet, golden yellow wine. Today’s white Orvieto is dry, but a semi-sweet style, known as Orvieto Abboccato, and a sweet (dolce) are also produced in small quantities.

Museo Archeologico Nazionale di Orvieto Visitors to Orvieto should not miss the two small museums located on the Piazza del Duomo. These are the National Archaeological Museum which holds the most recently found archaeological materials from the city and surrounding area, and the Museum of…
Read More »