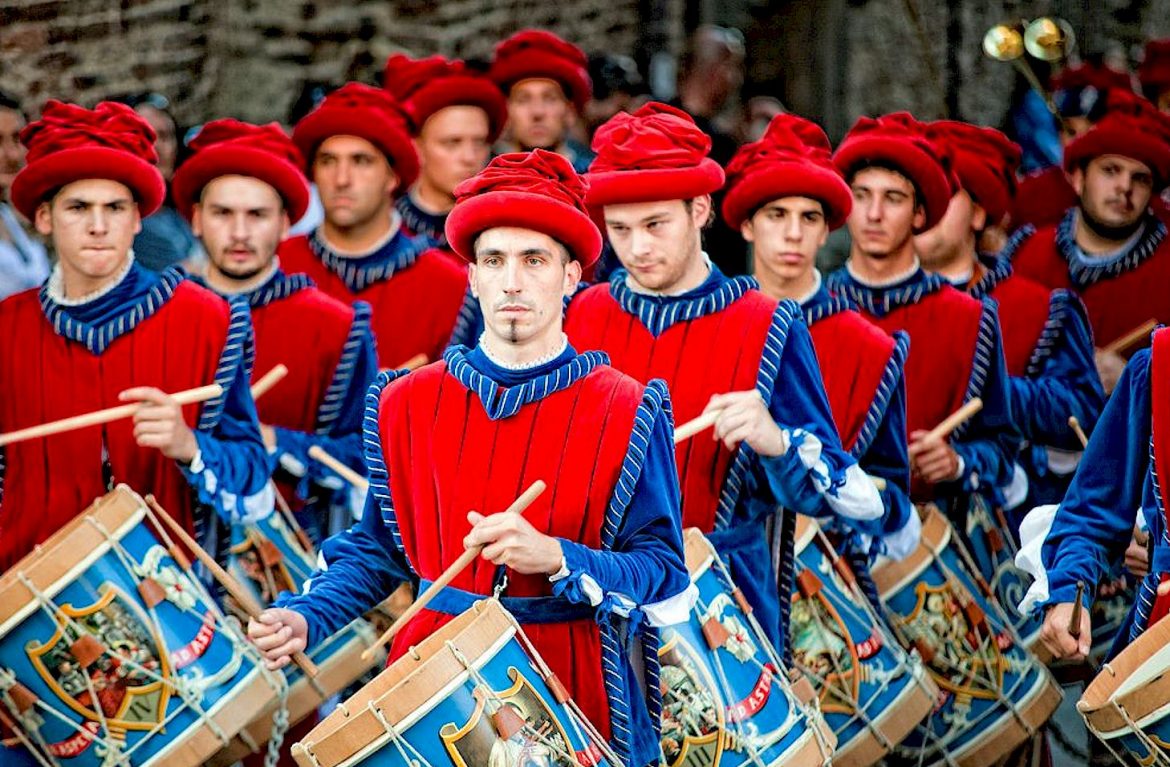 The Palio of Sienna is world famous, the exciting horse race where the age-old districts of the Sienna compete for a prize known as the “palio” or “pallium”, a banner of painted silk named after the homonymous ecclesiastical vestment. In fact, quite a number of palio competitions are held throughout Tuscany and Umbria. One of the most famous is the Palio of Città della Pieve, known locally as the Palio dei Terzieri. Città della Pieve is a pretty little hilltop town of about 8000 inhabitants and located in Umbria, right on the Tuscany-Umbria border. The palium in this case is a beautiful tapestry painted by the Pievese master Antonio Marroni. The palio competition, the Palio dei Terzieri, is not especially ancient in the case of Città della Pieve, having been invented in 1962 by Don Oscar Carbonari, the parish priest at that time. The Palio of Città della Pieve is now one of the best mediaeval festivals in Umbria and the main tourist attraction of the town.

The Palio of Città della Pieve takes place during August (roughly the 10 days to the second-to-last Sunday of the month, with the main event taking place on the Sunday). The “terzieri” are the three districts composing Città della Pieve and also many other Umbrian and Tuscan towns. The division into terzieri dates from mediaeval times and in the case of Città della Pieve is said to symbolise an eagle, with the head corresponding to the Terziere Castello (the “Castle Third”) or Classe dei Cavalieri (Class of the Knights), the stomach to the Terziere Borgo Dentro (the Third of the people living within the walls) and the wings and tail to the Terziere Casalino or Class of the “little house dwellers”. In ancient times, the Terzieri were well-defined with regard to social rank as well, representing three distinct social classes. The Terziere Castello was composed of members of the aristocracy, the Borgo Dentro of the middle class, with the peasants making up Terziere Casalino.

The day of the Lancio della Sfida (Launch of the Challenge), is Ferragosto, 15 August, usually starting at 5.30pm in the Piazza Plebiscito, during which the Pallium is returned by the winning Terziere of the previous year to the Podestà of Castel della Pieve who keeps it until the competition on the last day of the Palio.

The culmination of the Palio usually starts at 5 pm on the second to last Sunday of August when the Corteo Storico, the parade in historical costumes, usually with around 800 participants, starts from Piazza del Plebiscito. Bringing up the rear are the Maestro di Scena (the Master of the Event), the Portagonfalone (the banner carrier), the Armati del Comune (the town militia), the Giudici di Campo (the judges of the competition) and an allegorical float of Classical inspiration. The parade arrives at the Campo de li Giochi (field of the games), the Campo di Santa Lucia, the location for the culminating event. This is the Caccia del Toro, an archery competition inspired by the ancient Sienese “Cacce” (hunts). Each Terziere has three participants, each with three arrows. The targets are three silhouettes of Chianina oxen mounted on a carousel. Every target has the colours of the corresponding Terziere. The targets also turn three times, speeding up with each turn. Whichever Terziere makes the most and most accurate hits wins the Palio.

Throughout the duration of the Palio there are numerous interesting events including mediaeval parades, plays, Renaissance music, juggling and so on, but one of the best parts is probably the Taverne of the Terzieri, where can enjoy the specialities of the traditional Umbrian-Tuscan cuisine.

Not to be missed. More about Città della Pieve.