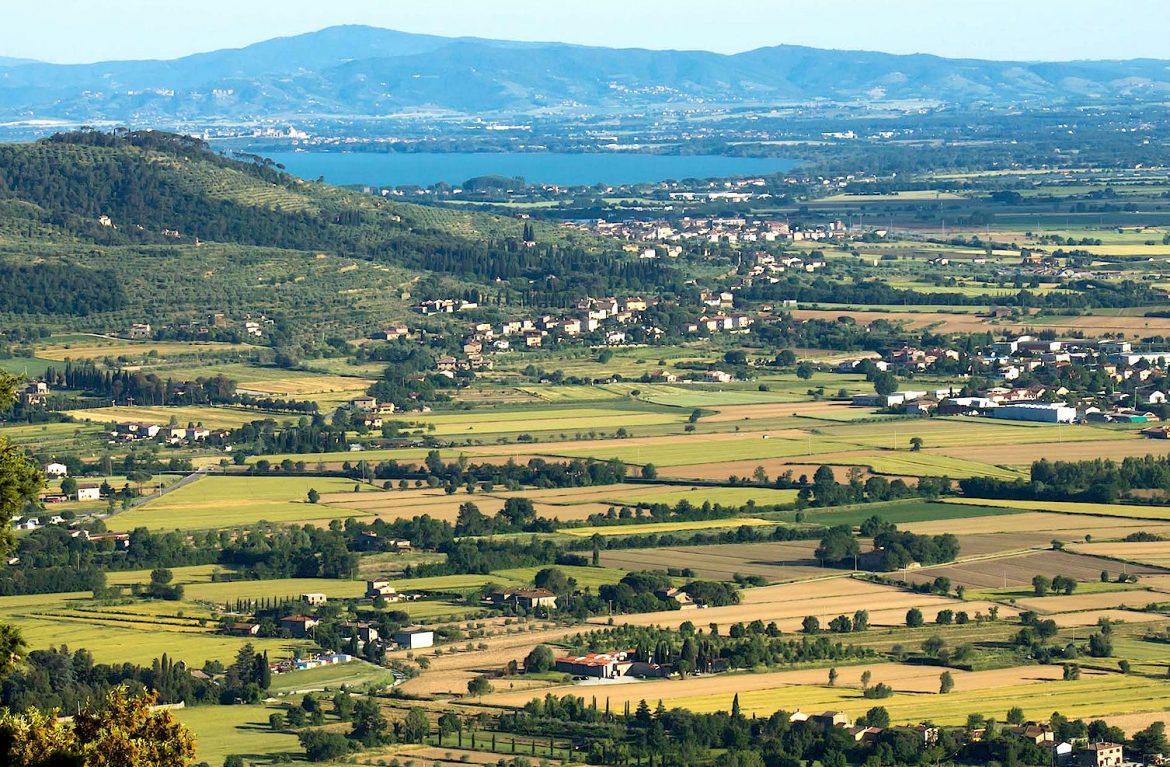 Areas of Umbria, Useful information for visitors to Umbria

The Val di Chiana of Umbria and Tuscany

The Val di Chiana (Chiana Valley) is located in the territories of the provinces of Arezzo and Sienna in Tuscany and the provinces of Perugia and Terni in Umbria. For travellers between Rome and Florence, the Val di Chiana represents the point of contact between the Regions of Umbria, Tuscany and Lazio. The river Chiana river, previously the Clanis, since at least the 4th century BC was navigable by boats sailing from Arezzo to the Tiber, a distance of 60 km. As the slow-flowing river silted up, the southern part of the valley became a lake until the 16 C. Leonardo da Vinci drew a bird’s eye view of this lake. The beauty of the valley and the excellence of farming activity there was mentioned by Pliny the elder in his Naturalis Historia III, 52-54.

To the northeast, the Val di Chiana is bounded by the Tuscan pre-Apennines crowned by the Alta Sant’Egidio at 1,057 m, Monte Lignano at 837 m, and Monte Corneta at 744 m. To the southeast, the Val di Chiana reaches Lake Trasimeno and the valley of the Nestore River. To the west, it extends to the Val d’Orcia, where it reaches its highest elevation at 1,148 metres (3,766 ft) on (Monte Cetona).

Monteleone d’Orvieto, Fabro, Carnaiola, Parrano and Città della Pieve are some of the villages located in the Umbrian part of the Val di Chiana. These off the beaten path towns form an ideal base for exciting excursions encompassing Nature and places of great historical and artistic interest. The routes that wind through the Val di Chiana allow visiotrs to enjoy the beauty of the landscapes and the charm of the villages, discovering unique works of art from the Etruscans to the Renaissance and later, old and new crafts, and excellent food and wine. That beauty of the Val di Chiana was masterfully captured by the greatest interpreter of this area, Pietro Vannucci, known as Il Perugino, of whom Città della Pieve, the largest of the villages in this area, was birthplace.

The Val di Chiana is also the home of the magnificent Chianina Oxen, snow white and the largest cattle in existence. Fifty years ago, these beautiful animals were to be seen everywhere pulling huge carts and ploughs. Now they are less ubiquitous but still highly valued for the excellent steak they produce and which is the steak of choice for bistecca alla fiorentina.

Municipalities in the Val di Chiana

This is the part of the Province of Arezzo in the Region of Tuscany covered by the municipalities of:

This is the part of the Province of Sienna in the Region of Tuscany covered by the municipalities of:

“Roman” Val di Chiana refers to the territory of five municipalities in Umbria. Three of these are in the Province of Perugia:

and two are in the Province of Terni:

More about the Val di Chiana.