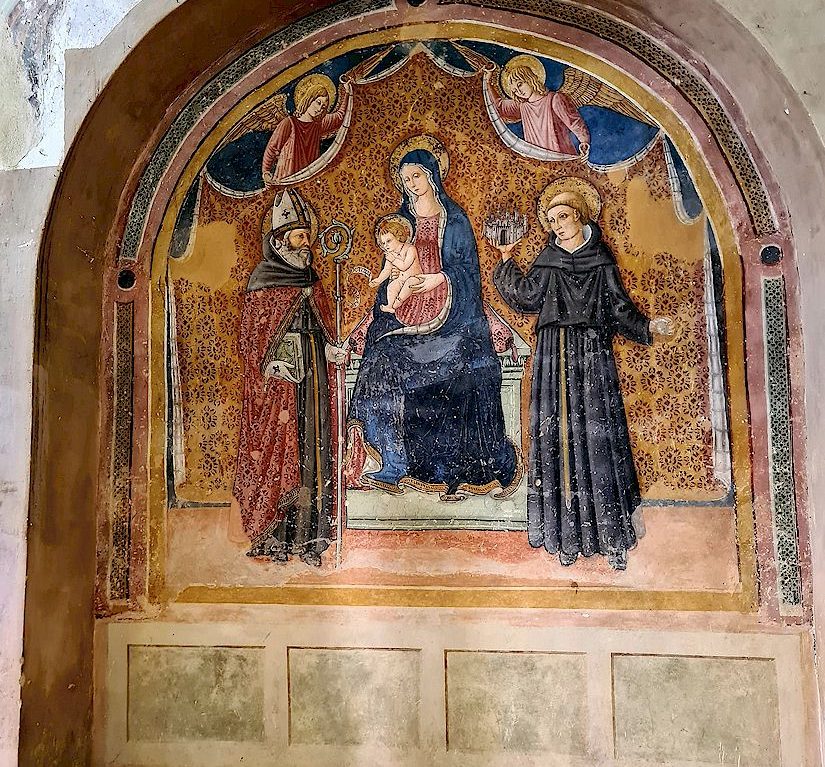 Abbeys and Churches of Umbria, All about Umbria, Sights of Umbria

Chiesa di sant'Agostino in the town of Montefalco, Umbria

In 1275, the Augustinians moved to the village of Castellare, near one of the main gates of the first wall of Montefalco, where there was a small church dedicated to St. John the Baptist, gifted to the Order by the Municipality. Work on the new church, in gothic style, began in 1279 at the behest of the Augustinian friar Beato Angelo da Foligno who is depicted in a fresco inside the church, and lasted until 1285. The building was later enlarged in 1327.

Facade of the church

The simple and elegant stone facade has a beautiful portal dating from the end of the 13 C, with bundles of small columns and rich capitals, while the central rose window is the result of a subsequent restoration.

Interior of the church

The interior consists of a large hall with exposed wooden trusses and ending with a polygonal apse with a ribbed vault. On the right is the minor nave, the result of a 14 C extension that brings together a series of chapels. The walls are covered with frescoes ranging from the 14 C to the 16 C.

On the counter-façade, to the right of the portal, there is a Madonna and Child from the Umbrian school of the early 15 C, although it displays Siennese influences, while on the left there is a Madonna della Misericordia, a contemporary fresco to the previous one, but with characteristics of the Gubbio school.

In the fifth chapel on the right, there are fragments of frescoes by a follower of Benozzo Gozzoli, known as the Gozzolesco Expressionist. In the vault, there are damaged frescoes depicting Doctors of the Church. On the walls, there are a Crucifixion with Saints, a Madonna with Child and Saints Peter, Fortunato, Paolo and Severo, and Stories of Saints Fortunato and Severo. In the arch itself, there are Christ carrying the cross, St. John the Baptist and Christ blessing with saints.

In the sixth chapel on the right, there are fragments of frescoes by Pier Antonio Mezzastris and Francesco Melanzio. The face of the Madonna remains of the latter. In the extrados of the triumphal arch, there is a rich but very worn 14 C fresco decoration, depicting the mystical Lamb between angels and saints. Above the main altar, there is a wooden crucifix from the 15 C.

On the left wall of the nave, within a niche, there is a Madonna with Child between Saint Augustine and the Blessed Angelo da Foligno, by a 15C master of Foligno, perhaps Ugolino di Gisberto, while in the following niche there is the Madonna of the Girdle between two saints, a work attributed to Giovanni Battista Caporali. Then there is a Coronation of the Virgin with Eve lying at the bottom, a large fresco from the end of the 14 C in a style similar to that of Ambrogio Lorenzetti. Following that, within niches, are paintings by Bernardino Mezzastris and a wooden statue of San Nicola da Tolentino from the 15 C.

The church also houses the bodies of the Blessed Chiarella and the mummified body of Blessed Pellegrino.

In the vault there are frescoes by an unknown Umbrian painter of the 15 C, still in late Gothic style, that depict the Eternal Father with the four Doctors of the Church. In the segments of the sele, there are Santa Monica, the blessed Giovanni d’Amelia, San Nicola da Tolentino, the blessed Agostino Novello, Santa Caterina, San Giovanni Battista, Sant’Antonio abate and San Paolo the hermit.

Eremo delle Carceri The Eremo (Hermitage) delle Carceri is a refuge located not far from Assisi in a steep forest gorge on the slopes of Monte Subasio, at 791 m (2,595 ft) above sea level. The name Carceri comes from the Latin carceres,…
Read More »