The Church of St John the Baptist at Arrone in Umbria 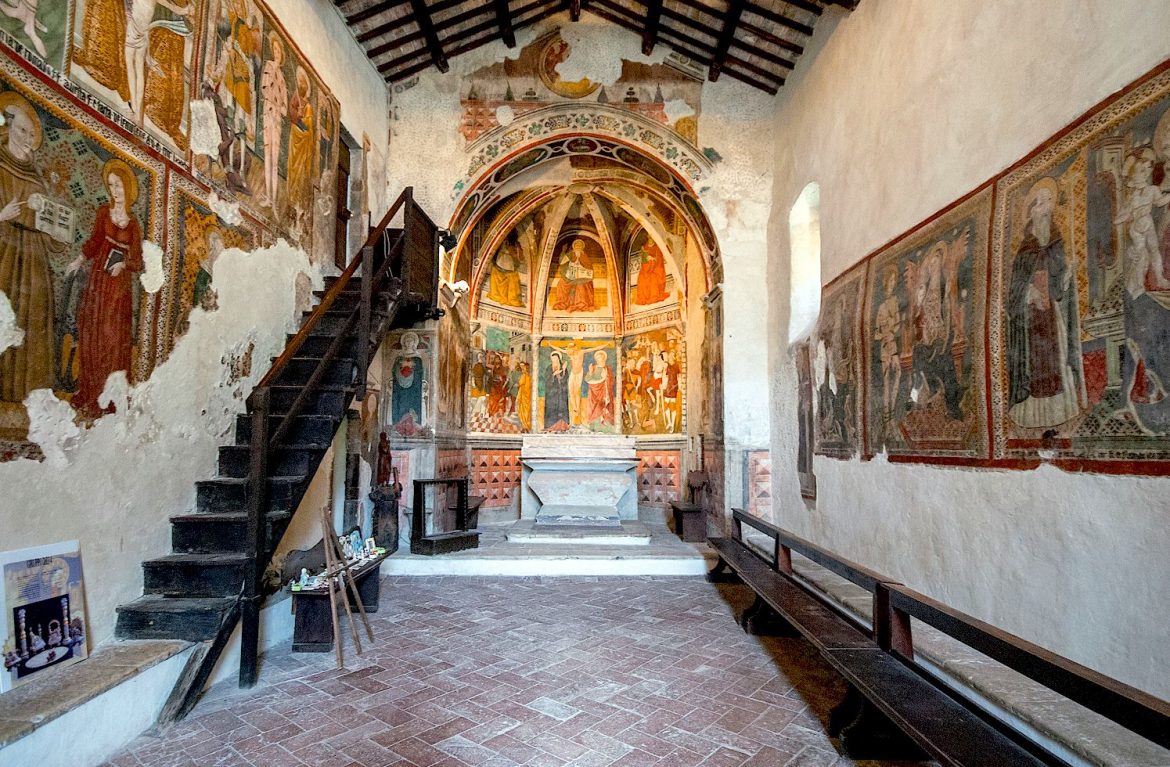 Abbeys and Churches of Umbria, All about Umbria, Sights of Umbria, Things to see in Umbria

The Church of St John the Baptist at Arrone in Umbria

In addition to the major artistic and historical sights of Umbria, there are a number of exquisite gems that can easily be missed by visitors to this region. One of these is the castle of Arrone which forms the highest part of the village of the same name and is of great interest. It preserves the original mediaeval urban layout, with its walls and its picturesque alleyways. Visitors should look for the Civic Tower, the 16 C collegiate church of Santa Maria, the former convent of San Francesco and, above all, the 14 C church of San Giovanni Battista with its ancient frescoes of the Umbrian school. The church of San Giovanni Battista (St John the Baptist) is one of the most important monuments of the castle of Arrone. In addition, the nearby hamlet of Casteldilago is home to to the Church of San Nicola, with frescoes by Giovanni di Pietro, called ‘the Spaniard’, or a pupil of his, and the Sanctuary of the Madonna of the Round Rock.

The oldest part of Arrone corresponds exactly to the castle that was built at the end of the 9 C by a Roman nobleman of the same name. The fief of the noble family of the Arroni at its peak extended over considerable tracts of this part of Umbria. The Arroni were linked to the Dukes of Spoleto, whose domination ended in 1198.

At the beginning of the 13 C, the Arroni progressively lost territory, autonomy and prestige in favour of the new town of Spoleto, and finally became subjects of Spoleto in 1229. In 1315, the Arronese recovered all of the communal territory of their ancient lords and in 1347 it became a municipality. In 1542 the inhabitants wee among the leaders of the revolt of the lower Valnerina against the feudal rule of Spoleto. Arrone was sacked by the Lanzichenecchi in 1527 and by the French in 1799.

In a land like Umbria where, from the beginning of the 15 C, great works of art and architecture flourished, let’s not forget to enjoy the “minor” art of the small church of San Giovanni Battista di Arrone, dating from 1413. The church of St John the Baptist was built in the Gothic style of the 12 C and 14 C, and was later significantly restructured between 1467 and 1476 by Lombard workers appointed by the Municipality.

The church is a tiny gem decorated with paintings were executed between 1482 and 1500. Those of the side walls are mostly ex voto, while those in the apse tell the story of the saint. The identity of the fresco artist is unknown but his style and content demonstrate clearly that he was familiar with the frescoes painted by Filippo Lippi in the cathedral of Spoleto and those of Benozzo Gozzoli in Montefalco, as well as that he appreciated the work of Piermatteo d’Amelia and Antoniazzo Romano. The frescoes, contained within frames of fake mosaic, represent figures of saints, created for the Arronesi families for graces received and to be protected from illness and misfortune.  It’s no coincidence that the figures of S. Antonio Abate and S. Sebastiano recur very often. They were considered protectors from the plague, a disease responsible for many deaths at the time.