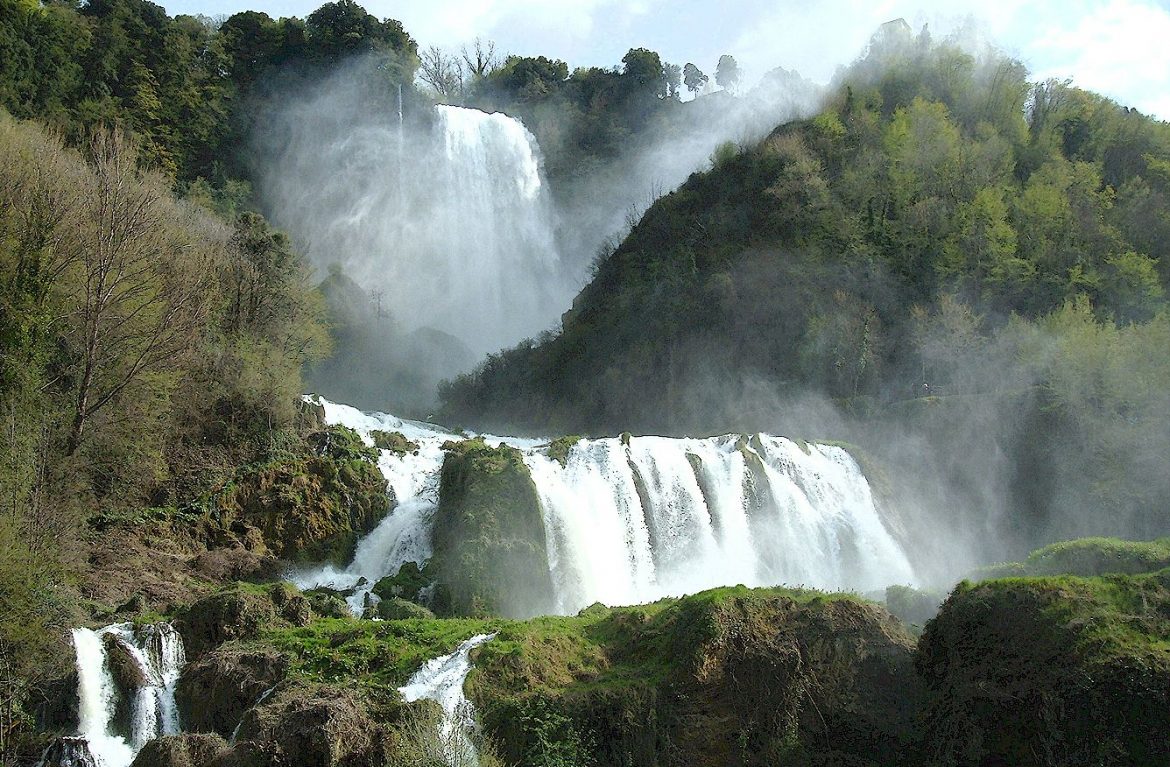 Cascata delle Marmore waterfalls created by the Romans in Umrbia

The Cascata delle Marmore waterfalls, which are located about 8 km from Terni, in Umbria, are not a natural phenomenon but were created by the ancient Romans. The water source of the falls is Lake Piediluco which is fed by the river Velino (the balance of the flow powers a hydroelectric station). The falls descend into the river Nera in the valley below. The falls are in effect turned on and off according to a fixed schedule, for the joint benefit of tourists and the power company. Visitors should try to be there at the moment the gates are opened in order to see the powerful initial rush of water.

The Velino river flows through the highlands that surround the city of Rieti. In ancient times, the river fed a marsh in the Rieti Valley that was thought to be a source of disease (probably malaria). To remove this annoyance to the city of Rieti, in 271 BC, the Roman consul Manius Curius Dentatus ordered the construction of a canal (the Curiano Trench) to divert the pestilential waters through and over the natural cliff at Marmore. From there, the water fell into the Nera river below. However, that solution created a new problem: when the Velino river was in flood, its water flowed through the Nera towards Terni, threatening to flood that city. The issue was so contentious that the Roman Senate was forced to address it in 54 BC. Aulus Pompeius represented Terni, and Cicero represented Rieti but nothing came of this debate and the problem remained for centuries.

Lack of maintenance in the canal resulted in a decrease in the flow, until eventually the marsh began to reappear. In 1422, Pope Gregory XII ordered the construction of a new canal to restore the original flow (the Gregorian Trench or Rieti Trench). In 1545, Pope Paul III ordered yet another canal to be built (the Pauline Trench). The idea was to expand the Curian Trench and to somehow regulate the flow. This effort took almost 50 years and when Pope Clement VIII inaugurated the new canal in 1598, he named it after himself: the Clementine Trench.

In the following two centuries, the presence of the canal continued to be problematic for the countryside in the valley below, as the Nera often flooded it. In 1787, Pope Pius VI ordered architect Andrea Vici to modify the leaps below the falls, giving the falls there current appearance and finally resolving the majority of the flooding problems.

In 1896, the newly formed steel mills in Terni began using the water in the Curiano Trench to power their operation and it was subsequently used to generate electricity. Lake Piediluco, above the falls, thus forms a reservoir for the power station so that, most of the time, the water in the canals above the falls is diverted to the hydroelectric station. The volume of water flowing over the falls themselves during this time is thus greatly reduced. To maintain the operation of the power station and to satisfy tourists, the falls are turned on according to a set schedule, achieving a spectacular effect at full flow. An alarm is sounded first, then the gates are opened, and in a few minutes the small stream is transformed into a full-sized river rushing into the void below.

Normally, the falls are turned on between 12:00 and 13:00 and again between 16:00 and 17:00 every day, with additional times on holidays. An entrance fee is charged to visit the falls and the surrounding area.

A path along the falls allows the visitor to hike up to the top of the falls. Along the way, a tunnel leads to an observatory just next to the falls, where a visitor is guaranteed to get soaked. A safer observatory near the top affords a grandiose view of the falls and of the Nera valley below.

Eremo delle Carceri The Eremo (Hermitage) delle Carceri is a refuge located not far from Assisi in a steep forest gorge on the slopes of Monte Subasio, at 791 m (2,595 ft) above sea level. The name Carceri comes from the Latin carceres,…
Read More »

Narni Narni in Umbria is first referred to as “Nequinum”, a populated nucleus dating back to about 600 BC. By 299 BC, Narni had become a Roman colony named “Narnia”. The name comes from the nearby Nar river, which is called…
Read More »