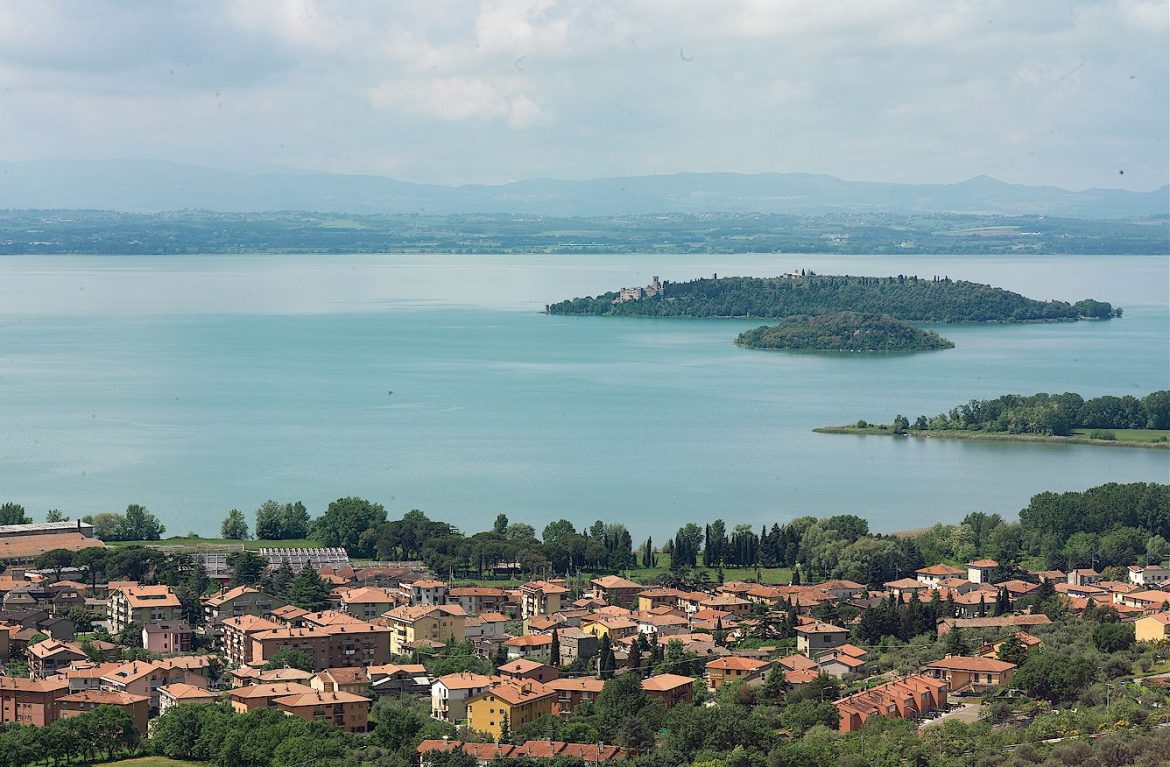 A trip around Lago Trasimeno in Umbria, Italy

Lake Trasimeno (Lago Trasimeno), known historically as “the lake of Perugia”, is the largest lake in peninsular Italy, being slightly smaller than Lake Como, and the lake has always been of importance for the whole of north-western Umbria and for the Tuscan Chiana Valley. The lake has three islands, one inhabited, and several attractive villages on its circumference. Passignano, Monte del Lago and Castiglione del Lago have all remained virtually intact through the centuries. The shores of Lake Trasimeno are for the most part dense with reeds that are the home to a wide range of bird-life. A drive around the lake makes an excellent one day excursion.

Lake Trasimeno was always quite shallow, muddy and rich in fish (pike, carp, tench), but the shallow waters meant also malarial mosquitoes prospered. Lake Trasimeno is an endorheic body of water, meaning that it has incoming streams but no outlet. As a consequence, the water level fluctuates greatly depending on the annual local rainfall and in some areas the shoreline shifts by 100 m or more. A few times in a century, the entire surface of the lake freezes over.

The first inhabitants of the area around Lake Trasimeno known to us were the Etruscans, with three of their main cities, Perugia, Chiusi and Cortona, within 20 km of the lake. Very little physical evidence remains from the period of Etruscan or later Roman settlement. Castiglione del Lago has some Roman ruins and its main streets are laid out like a Roman camp.

There are three islands in the lake. The second largest, Isola Maggiore, is the only inhabited one. The small fishing village, which reached its height in the 14 C, today has only around thirty residents. Most of the buildings, including the ruins of a Franciscan monastery, date from the 1300s. The largest of these isles is Isola Polvese, almost 1 km².

There are many castles all around Lake Trasimeno, many of them being in the centre of small towns while some others are isolated and in ruins. Castiglione del Lago, Passignano, Magione, Maggiore and Polvese isles have all a castle, while Zocco Castle, Montali Castle and others are on hilltops.

In 1995, a nature park was established covering the surface and shores of Lake Trasimeno, and a 50 km bicycle path around the lake was inaugurated in 2003. There are also cross country paths, especially over the hills on the eastern side. A visit to some part of the lake makes an excellent excursion for tourists staying the Perugia or Cortona.