Gubbio - what to see and where to stay in Gubbio, Umbria, Italy

Gubbio
You are here:
Home » Towns of Umbria » Towns in the Province of Perugia in Umbria » Gubbio 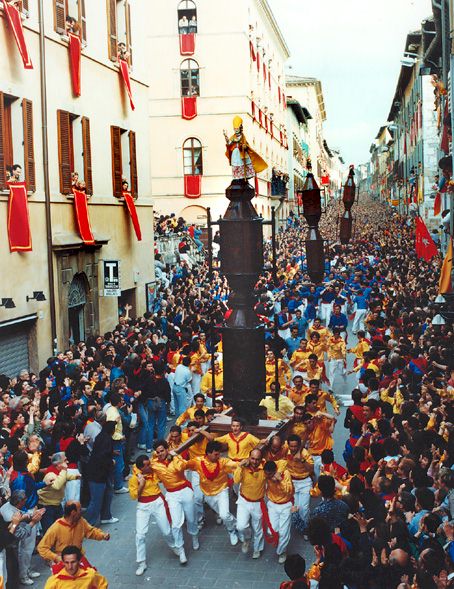 What to see and where to stay in Gubbio, Umbria, Italy

Gubbio, Iguvium of the Romans and Eugubium in mediaeval times, was long ago the capital of Umbria and is beautifully located at the foot and on the slopes of Monte Ingino and Monte Calvo, with a splendid view out over Umbria.

The most prominent building in Gubbio is the Palazzo dei Consoli, on the north side of the Piazza della Signoria. This is a huge Gothic structure with a tower, erected in 1332-1346, according to tradition, by Matteo di Giovanello of Gubbio. Being on the slope of the hill, it is, like the whole piazza, raised on arched substructures.

On the south side of the piazza is the Palazzo Pretorio (Palazzo della Podestà) begun in 1349 and now the municipal palace. It contains the famous Tabulae Iguvinae and a collection of paintings of the Umbrian school, furniture and majolica. On the east side is the modern Palazzo Ranghiasci Brancaleone.

Above the Piazza della Signoria, at the highest point of the town, is the Palazzo Ducale, erected by the dukes of Urbino in 1474-1480. The architect was probably Lucio da Laurana who also designed the palace at Urbino, which this palace resembles, especially in its fine colonnaded court. The Palazzo Beni, lower down, belongs to a somewhat earlier period of the 15 C. Pope Martin V. lodged here for a few days in 1420. The Palazzo Accoramboni, on the other hand, is a Renaissance structure, with a fine entrance arch. Opposite the Palazzo Ducale is the Duomo, dedicated to SS. Mariano e Jacopo and dating from the 12 C. The interior contains some good pictures by Umbrian artists, a fine episcopal throne in carved wood, and a Flemish cope given by Pope Marcellus II (1555) in the sacristy. The exterior of the Gothic church of S. Francesco, in the lower part of the town, built in 1259, preserves its original style, but the interior has been modernised, as have the interiors of the Gothic churches of S. Maria Nuova and S. Pietro. S. Agostino, on the other hand, has its Gothic interior better preserved. The whole town is full of specimens of mediaeval architecture, the pointed arch of the 13 C being unusually prevalent for an Italian city.

The Palio dei Ceri (Corsa dei Ceri – candles) takes place in Gubbio on the 15 May each year, in honour of S. Ubaldo, when three colossal wooden pedestals, each over 6 m high, and crowned by statues of SS. Ubaldo, Antonio and Giorgio, are carried through the town, and then, in a wild race, up to the church of S. Ubaldo on the mountain-side.

After its reconstruction with the help of Narses, the town remained subject to the exarchs of Ravenna, and, after the destruction of the Lombard kingdom in 774, formed part of the donation of Charlemagne to the Pope. In the 11 C, the beginnings of its independence may be detected. In the struggles of that time, it was generally on the Ghibelline side. In 1151, Gubbio repelled an attack of several neighbouring cities and formed from this time a republic governed by consuls. In 1155, it was besieged by the emperor Frederick I, but saved by the intervention of its bishop, S. Ubaldo, and was granted privileges by the emperor. In 1203, it had its first podestà, and from this period dates the rise of its importance. In 1387, after various political changes, it surrendered to Antonio da Montefeltro of Urbino and remained under the dominion of the Dukes of Urbino until, in 1624, the whole duchy was ceded to the Pope.

Gubbio occupies an important place in the history of Italian majolica. In a decree of 1438 a “vasarius vasorum pictorum” is mentioned, who probably was not the first of his trade. The art was brought to perfection by Giorgio Andreoli, whose father had emigrated here from Pavia, and who in 1498 became a citizen of Gubbio. The works by his hand are remarkable for their ruby tint, with a beautiful metallic lustre. His art was carried on by his sons, Cencio and Ubaldo, but was afterwards lost, and only recovered in 1853 by Angelico Fabbri and Luigi Carocci.

Deruta Deruta is a major centre for the production of painted ceramics in Italy and this is the main reason to visit this attractive town in the Province of Perugia. Nevertheless, in Deruta there are a fine gothic church and an…
Read More »